Richard Koh Fine Art (RKFA) is pleased to announce its participation in Art Basel Hong Kong 2022 with a group presentation of Natee Utarit (b.1970, Thailand), Svay Sareth (b.1972, Cambodia) and Wah Nu (b.1977, Myanmar). The presentation will comprise of 6 paintings and 1 soft sculpture.

The presentation aims to provide a survey of leading Indochina artists vis-à-vis the contemporary art practices of Natee Utarit, Svay Sareth and Wah Nu. While the traditionally-derived images that dominate popular forms of Indochina art – from monks to landscapes – are absent, the works in this presentation foreground other familiar tropes that have come to define the region; political authoritarianism and the anticolonial legacy.

Anchoring the booth is Svay Sareth’s salient soft sculpture titled, The Heart Healer and is installed in likeness of a religious statue within a temple. The sculpture is a representation of Svay’s mother in which is materialised by a combination of camouflaged and civilian clothes. It is essentially a reminder of his failed escape attempt from the infamous Site-II refugee camp, when he was just 13 years of age, and more importantly, the immense regret of abandoning his mother. As a gesture of apology, Svay gifted his mother a bouquet of lilies.

The urgency of political reform is very much apparent in Myanmar and we are reminder that political authoritarianism is still very much a stigma of the region. In the midst of social upheaval, Burmese artist Wah Nu offers an avenue of release and focusing on one’s inner mind through her paintings. Her Cloud series, in a way, represents the social consciousness of the nation, where the act of painting becomes way of relaxation and escape from the drudgery of the current situation. Her clouds float in a single sea of colour with no distractions in the background, invoking a sense of transcendence beyond the material realm.

Through his acclaimed Your Past is My Future series, Utarit continues his investigation of the relationship between European colonialism and Southeast Asian culture. Utarit focuses his attention on the dynamics through which the West has exerted its influence both on the style and on the art of Southeast Asia, with these new paintings he looks at the common aspects of different cultures. At the base of the new cycle of works there is the awareness that it is possible to give new life to one’s own culture starting from the aspects shared with different cultures with a glorious past.

As rich and diverse the region may seem, this presentation hopes to reveal the juncture that Indochina contemporary art is currently at and its shared affinity of struggle, mission, and most importantly, hope. 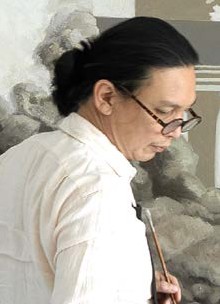 His work is part of many renowned collections, such the Bangkok University, Bangkok, Queensland Art Gallery and Gallery of Modern Art, Brisbane, Singapore Art Museum, Singapore, as well as private collections in Europe and Asia.

Utarit’s multifaceted practice focuses on the exploration of the medium of painting connecting it with photography and classical Western art. Light and perspective are some of the elements the artist chose to work with, focusing on painting as a means to explore image making. His complex pictures, juggle wide-ranging metaphors usually in the format of the traditional still life, allude to Thailand’s current social and political landscapes. 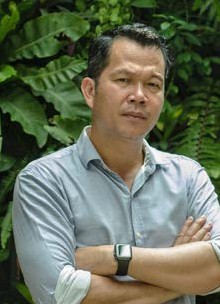 Svay Sareth (b.1972, Battambang, Cambodia)’s works in sculpture, installation and durational performance are made using materials and processes intentionally associated with war – metals, uniforms, camouflage and actions requiring great endurance. While his critical and cathartic practice is rooted in an autobiography of war and resistance, he refuses both historical particularity and voyeurism on violence. Rather, his works traverse both present and historical moments, drawing on processes of survival and adventure, and ideas of power and futility. More recently, Svay confronts the idea that “the present is also a dangerous time” through the appropriation and dramatization of public monuments that hint at contentious political histories.

Svay Sareth was born in 1972 in Battambang, Cambodia during a period of political turmoil and violence that would last until he was 18 years old. Svay began making art as a young teenager in the Site 2 refugee camp, near the Thai-Cambodian border. He describes life as a refugee as “a void nationality…a time and place you imagine escaping from.” Drawing and painting became a daily activity for Svay – a process of bearing witness to the psychological and physical violence that was

an everyday experience, as well as a way to symbolically escape and dream of change. After the wars ended, Svay went on to co-found Phare Ponlue Selepak, a non-governmental organization and art school in Battambang that continues to thrive today. In 2002, the artist continued his studies in France, earning the Diplôme National Supérieur d’Études des Arts Plastiques / MFA in 2009, after which he returned to Siem Reap to live and work. 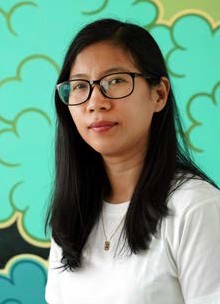 Wah Nu (b.1977, Yangon, Myanmar) began her artistic activities after studying music at the University of Culture, Yangon. She currently works in various media, primarily painting and film. Wah Nu has been creating pop-style paintings through which she expresses her personal emotions, employing clouds and foliage as motifs. In tandem with painting, Wah Nu also creates films with a distinctive floating sense that evokes daydreaming.

Art Basel Hong Kong show, held at the Hong Kong Convention and Exhibition Centre, features premier galleries from Asia and beyond. Underlining Art Basel’s commitment to the region, half of the participating galleries once again have exhibition spaces in Asia and Asia-Pacific. The show provides an in-depth overview of the region’s diversity through both historical material and cutting-edge works by established and emerging artists.

Founded in 2005, with spaces in Kuala Lumpur, Singapore and Bangkok, RICHARD KOH FINE ART is committed to the promotion of Southeast Asian contemporary art on regional and international platforms. Centred around a core belief in developing an artist’s career, the gallery looks to identify understated, albeit promising practices, and providing it opportunities to flourish. Through its regular exhibition cycles, print & digital publications and cross-border gallery

For further information about the exhibition, please do not hesitate to contact Wei Fung at +60 16 491 2644 or the gallery at info@rkfineart.com.

All images are subjected to copyright.