In a region which is home to 55% of the world’s population, China, India and emerging economies such as Vietnam and Indonesia will be the principal drivers of growth in Asia Pacific. GDP will grow at 3.6% per year compared to the world average 2.5% and double in value by 2040. The middle class, who are the likeliest to travel, will increase by 1.1 billion to 3.2 billion and the propensity for people to travel is set to almost triple by 2040.

Of the demand for 17,620 aircraft, 13,660 are in the Small category like the A220 and A320 Family. In the medium and long range categories, Asia-Pacific will continue to drive demand with some 42% of global requirement. This translates to 2,470 Medium and 1,490 Large category aircraft.

Cargo traffic in Asia-Pacific will also increase at 3.6% per annum, well above the global 3.1% average and will lead to a doubling in air freight in the region by 2040. Globally, express freight boosted by e-commerce will grow at an even faster pace of 4.7% per year. Overall, reflecting that strong growth over the next 20 years, there will be a need for some 2,440 freighters, of which 880 will be new-build.

“We are seeing a global recovery in air traffic and as travel restrictions are further eased the Asia-Pacific region will become one of its main drivers again. We are confident of a strong rebound in the region’s traffic and expect it to reach 2019 levels between 2023 and 2025,” said Christian Scherer, Chief Commercial Officer and Head of Airbus International. “With an ever greater focus on efficiency and sustainable aviation in the region, our products are especially well positioned.”

“Our modern portfolio offers a 20-25 % fuel burn and therewith CO2 advantage over older generation aircraft and we pride ourselves that all our aircraft products are already certified to fly with a blend of 50% SAF, set to rise to 100% by 2030. In addition, our newly launched A350F offers efficiency gains of 10 to 40% compared to any other large freighter, existing or expected, both in terms of fuel consumption as in CO2 emissions. ”

Globally, in the next 20 years, there will be a need for some 39,000 new-build passenger and freighter aircraft, of which 15,250 will be for replacement. As a result, by 2040 the vast majority of commercial aircraft in operation will be the latest generation, up from some 13% today, considerably improving the CO2 efficiency of the world’s commercial aircraft fleets.

The global aviation industry has already achieved huge efficiency gains, as shown by the 53% decline in aviation’s CO2 emissions per revenue passenger kilometre since 1990. Airbus’ product range supports at least a 20% CO2 efficiency gain over previous-generation aircraft. In view of further ongoing innovations, product developments, operational improvements as well as market based options, Airbus has a clear ambition to achieve the air transport sector’s target to reach net-zero carbon emissions by 2050.

Airbus Global Market Forecast categorizes aircraft into Small, Medium and Large as per slide below 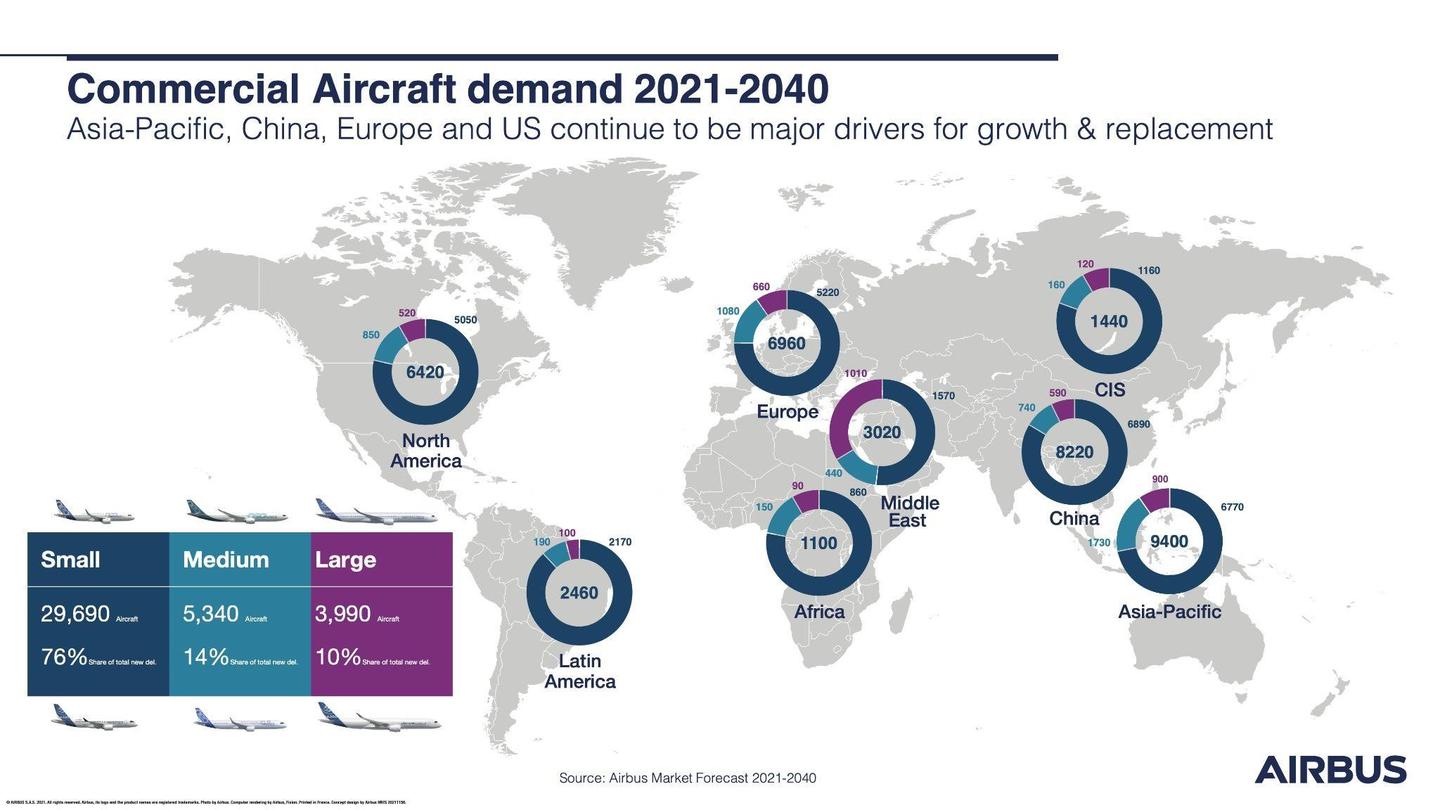