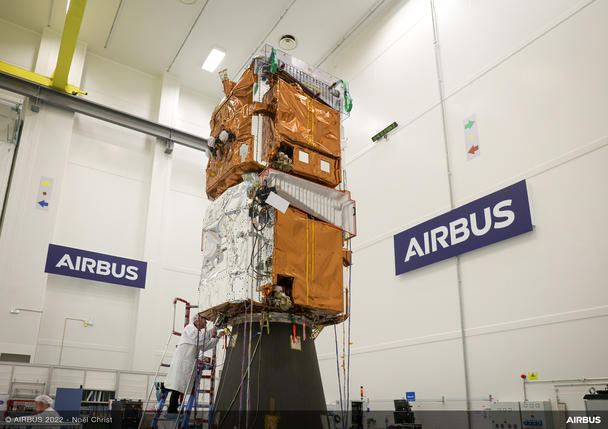 Bangkok, 24 May 2022 – The last two satellites of the Airbus-built, owned and operated Pléiades Neo constellation are on track for launch later this year, following successful final tests in Toulouse’s clean rooms.

Following the seamless parallel integration of both Pléiades Neo 5 and 6 satellites, and the successful conclusion of the environment (thermal vacuum, acoustic, vibration) test campaign, both final spacecraft are now ready to complete the Pléiades Neo constellation

Both satellites are due to be launched simultaneously on the Vega C European launcher from Kourou, in French Guiana. To tackle this dual launch, the Airbus space engineers came up with a smart and efficient dispenser-free design, where the satellites are stacked on top of each other, linked only by a clamp band.

This compact dispenser-free launch configuration saves volume and mass, as well as reducing cost. Simultaneously testing both satellites in their stacked launch configuration enabled significant time saving, with only four days needed to pass both the three axes Sine testing and the acoustic test.

“With this new bold, dispenser-free design, we were able to seamlessly integrate and test these two very high resolution satellites and ensure an optimised launch configuration: in a single launch, we will double the acquisition capacity of the Pléiades Neo constellation, and offer even greater responsiveness to our customers,” said Philippe Pham, Head of Earth Observation and Science at Airbus.

Comprising four identical satellites, the Pléiades Neo constellation will work hand in hand with the existing Pléiades satellites and the rest of the Airbus Earth observation satellite fleet. The highly compact Pléiades Neo spacecraft have a light weight, next generation silicon carbide optical instrument. They also have laser comms inter-satellite links with SpaceDataHighway (EDRS) geostationary satellites to enable urgent acquisitions in just 30 to 40 minutes following a tasking request to swiftly respond to the most critical situations.