Flowers Gallery is delighted to participate at ART SG 2023, with a presentation of our Asian program 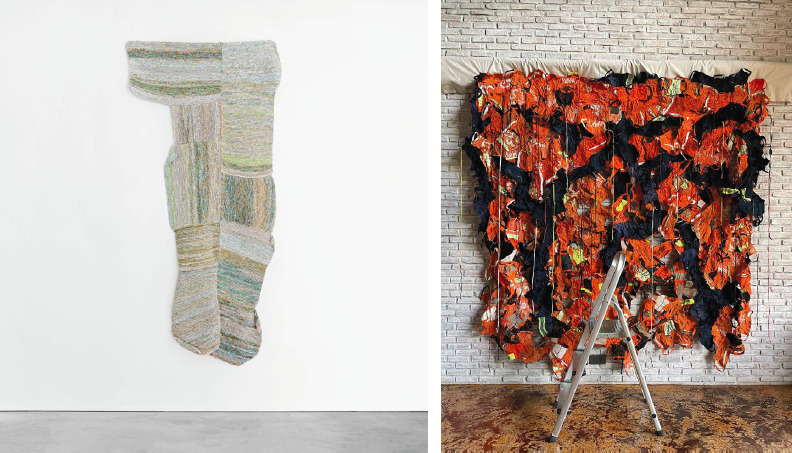 Chen’s multidisciplinary practice is rooted in the exploration of communication across different cultures. Words of Heartbeats VI (2020 – 2021) is the continuity of her communication through knitted from found maps and dictionaries, in which to connect and tell stories. Sirbutr conveys powerful responses to contemporary and historical societal issues in Thailand. His new work Mask (2022) is made fromThailand social worker’s jackets, transiting into masks.

Gazing into the daily objects, Ho’s work 20200412 (2020) is a fragmented slice of daily routines, creating the tension between human beings and reality. Wu’s work examines cultural exchanges between mainland China and Hong Kong alongside questions of identity and belonging, through revisiting personal memories and adapting Hong Kong aesthetics.

Recognised as one of Australia’s leading contemporary artists, AidaTomescu’s The open wounds of white clouds (2019) is characterised by the largely covered canvas with the use of white and cadmium red, magenta, cobalt violet and they create a wild and often whimsically playful surface.

Movana Chen (b. 1974) lives and works in Hong Kong. Chen studied fashion design at London College of Fashion, UK; Fine Art at the Royal Melbourne Institute of Technology(RMIT),HongKong, and Exhibition Studies and Art Curatorship at Hong Kong Art School. Chen’s work is in the collections of the Hong Kong Heritage Museum and CHAT (Centre for Heritage, Arts and Textile, Hong Kong.) Her work has been shown in numerous group and solo exhibitions across the world. In 2019, Chen was nominated for the ARTSPACE residency in Sydney, Australia. In Spring 2020, she had a solo exhibition titled KNITerature – Silent conversation at Andong Culture and Art Centre in Korea, and in the Autumn of 2020 was exhibited as part of Sight Unseen – Forking Paths in the CHAT collection at CHAT, Hong Kong.

Joyce Ho (b.1983) lives and works inTaipei,Taiwan. Ho received her M.A. in studio arts from the University of Iowa. She is an interdisciplinary artist, focusing specifically on painting, sculpture, and theater. Ho has worked as a script writer and theatre director. She works across diverse mediums from painting, video, to installation. With an illusion rich in light and shadow, the artistic conception aims to integrate the deconstructed movements and fragmented slices of daily routines. As such, the artist endeavors, whether in painting, installation or video, to convey an intimate, yet alienated tensions between human beings and reality.The singularly intensive creation simultaneously captivates and confronts viewers, which almost renders a quotidian moment into a piece of landscape or a ritual.

Wu Jiaru (b.1992) is a Hong Kong-based artist who received her dual BA degrees in Fine Arts and English Language from Tsinghua University in 2014, and her MFA from the School of Creative Media at City University of Hong Kong in 2017. Her work is in the collection of M+, Hong Kong. She recently received the New York fellowship grant from the Asian Cultural Council.

NOTES TO EDITORS
Image credits: All images © the artists, courtesy of Flowers Gallery.