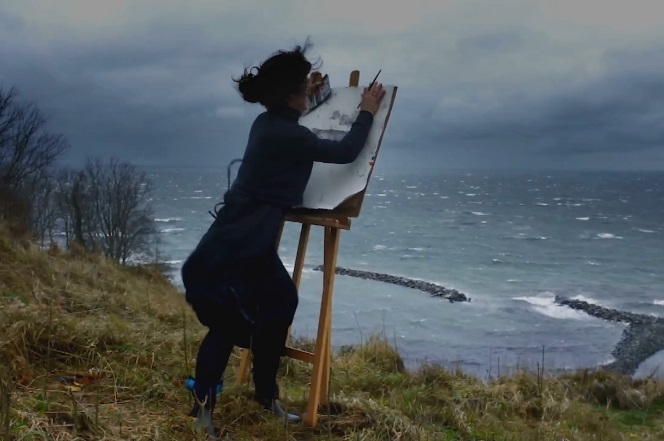 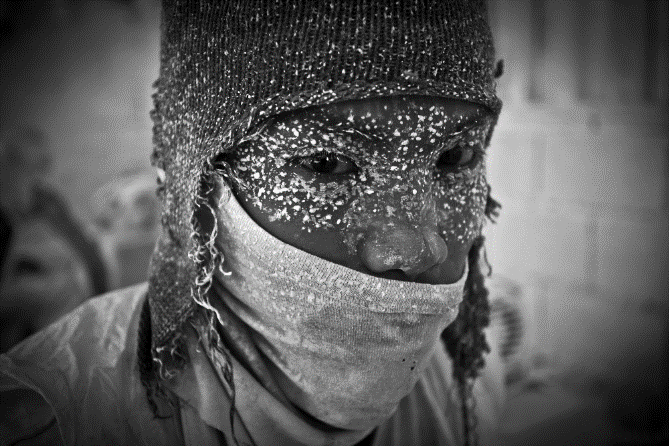 The exhibition traces the situations, both harsh and delicate, under which work happens. By work is meant the exertion and material of any sensible kind. The forms this work generates testify to, or in fact embody, an ecology that involves human labor, natural force, and historical memory. It is in this relationality, complicity, and meshing that the trace begins and leads to the state of nature and how it has been worked out for survival and ruin.

Nana Buxani explores the lives of workers in a quarry in the Philippine province of Romblon, known for its production of the formidable substance of marble. The extraction, the grinding, and the refining of attractive matter speak to the energies of making and the difficult beauty of craft and art.

Gabriella Hirst revisits the site where the Romantic painter Caspar David Friedrich paints storms; she waits herself for a storm to come, whereupon she renders the landscape almost in vain as she struggles with the blustery, almost impossible weather and the almost impossible effort. In another work, she returns to the French city of Verdun, particularly the battle fields of World War 1, now overrun by a forest, which in turn would be diminished by a fiery storm and thus inevitably lay bare the layers of violence inflicted on the land.

Finally, Hu Yun investigates the archives of migrant mining, shedding light on the names of the Chinese workers in Australia in the 19th century who dug gold in the mines; he asks a Chinese craftsperson to painstakingly engrave their names, which have mutated over time, on the grains of rice, which was the essential nourishment for these miners.

These artistic projects evoke the nature that underlies the work, whether it is the relentless wind or the precarious woods, the dust of marble that settles on a worker’s face, or writing on precious particles of staple food.

Commissioned by the Australian Center for Contemporary Art for NEW16

Patrick Flores is Professor of Art Studies at the Department of Art Studies at the University of the Philippines and Curator of the Vargas Museum in Manila. He is the Director of the Philippine Contemporary Art Network. He was the Artistic Director of Singapore Biennale 2019 and Convener of the Forums for the Taiwan Pavilion at the Venice Biennale in 2022.

Gabriella Hirst was born and grew up on Cammeraygal land (Australia) and is currently living between Berlin and London. She works primarily with moving image, performance, and with the garden as a site of critique and care. Gabriella’s research explores the politics of capture – most recently in relation to museums, gardens, hydrology, and colonial art histories. Gabriella is the recipient of the 2020 ACMI/Ian Potter Moving Image Commission, is a previous Marten Bequest Scholar and a recipient of the John Crampton Fellowship.

Born in Shanghai and graduated from China Academy of Art, Hu Yun is an artist currently based in Shanghai and Belgrade. In his practice, Hu Yun revisits historical moments in order to provide alternative readings, a process that also informs the artist’s self-reflection on his native and personal ties. His works have been exhibited at the Power Station of Art (Shanghai), Centre Pompidou (Paris), CCA Londonderry, The Cultural Centre of Belgrade, Para Site (Hong Kong) and Times Museum (Guangzhou).

Born in conflict ridden region of Mindanao in 1966, Nana Buxani is a documentary photographer, filmmaker, and painter whose work largely deals with issues such as child labor, children and women in difficult situations, children in detention, the plight of homeless people, communities in war-torn regions, the indigeous people and their claim to ancestral lands, urban poor communities, and people engaged in cooperative building. Her documentary film collaborations have been exhibited and won awards in film festivals.