Pléiades Neo, the next generation Earth observation constellation for a promising future

Pléiades Neo, the next generation Earth observation constellation for a promising future

Bangkok, 23 February 2022 – Pléiades Neo is a breakthrough in the Very High-Resolution (VHR) Earth observation domain, which will allow, once complete, to image any point of the globe, several times per day, at 30cm resolution. The constellation is made of four identical satellites, built using the latest Airbus’ innovations and technological developments. Highly agile and reactive, they can be tasked up to 15 minutes before acquisition, and send the images back to Earth within the following hour. The Pléiades Neo satellites have been entirely self-funded, designed and manufactured by Airbus. Smaller, lighter, more agile, accurate and reactive than the competition, they are the first of their class whose capacity will be fully commercially available.

Thanks to an imaging swath of 14km, the widest in its category, and the satellites’ unmatched agility, Pléiades Neo constellation will be able to cover the entire Earth landmass five times per year. The orbital configuration of the satellites has been maximised to serve a vast panel of customers and applications, including but not limited to defence, and beyond the ± 40° latitudes. They will all be placed on a polar and sun-synchronous orbit, phased at 90°, to deliver consistent quality, both geometric and radiometric. This will provide analysts with a high level of details, including more visibility of small objects, such as vehicles and road markings, and human counting. This level of accuracy offers more ground truth for image analysts and improves reliability for machine learning capabilities. The new constellation will also provide a higher geolocation accuracy and deeper spectral band information, allowing more insights to be derived for various applications (mapping, agriculture, environment, energy, infrastructure etc).The huge volume of data acquired every day, approaching 2 million km², will be ingested into innovative cloud-based ground segment architecture to allow massive production.

The highly innovative design of the Pléiades Neo spacecraft is equipped with the next generation silicon carbide optical instrument, building on the technology that Airbus first pioneered in the early 2000s. The Pléiades Neo constellation will also benefit from laser optical and Ka-band links with the Airbus SpaceDataHighway (EDRS) geostationary satellites to enable urgent acquisitions less than 40 minutes after tasking, to swiftly respond to the most critical situations. 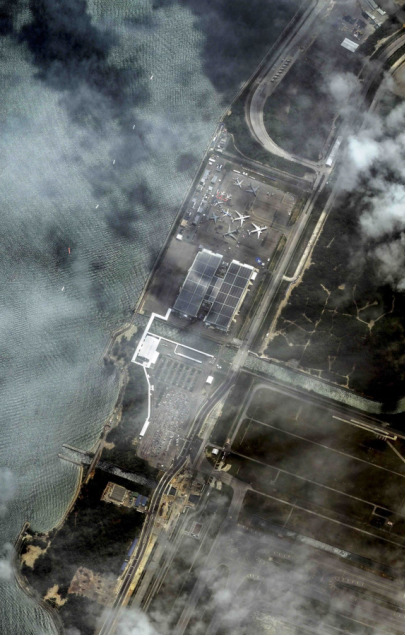