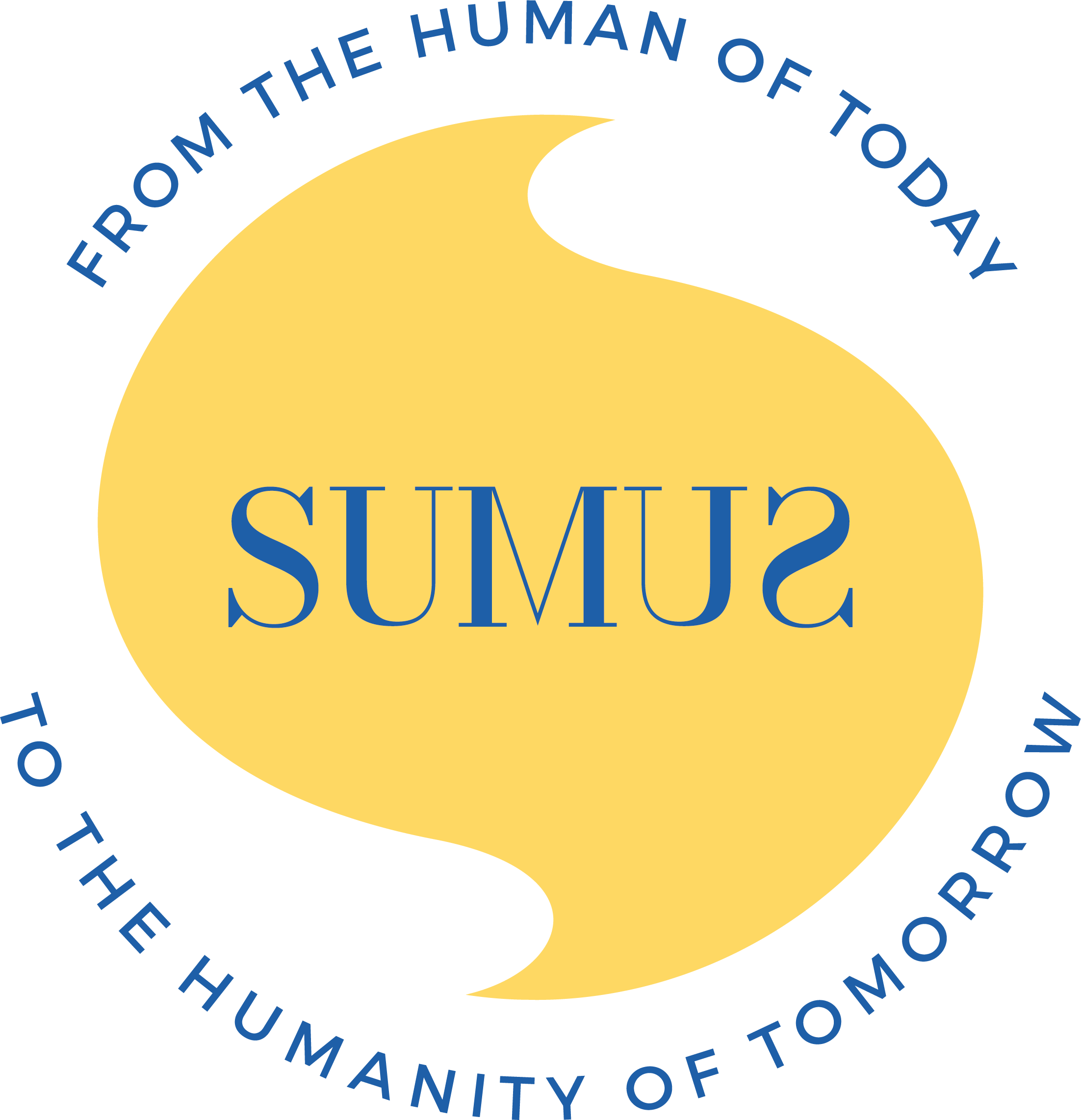 The Forge of the Future, Venice

The first exhibition of SUMUS, the Venetian headquarters of the cultural foundation created by Hélène Molinari in 2020, opens on 8 April 2022 at La Fucina del Futuro: “From Chaos to Harmony”.

Open to the public from 9 April until 17 July, “From Chaos to Harmony” intends to explore the transformative po- tential of art thanks to the awakening of consciences through the works of three international artists: VAL – Valérie Goutard, Sébastien Lilli and Brigitte Moreau Serre.

The exhibition is based on the rich symbology behind the number 7: it evokes the progressive scale, the degrees of consciousness, the 7 skies and the 7 stages of the journey of initiation. As science and quantum physics remind us, the universe is also not limited to the four dimensions we know and live our daily life in, but also includes 7 di- mensions that carry energy and information.

The three artists in the show will offer us three different and complementary illustrations that address the heart, mind and body in which the number 7 recurs: VAL – Valérie Goutard with her avant-garde sculpture in 7 scenes entitled “From Chaos to Wisdom”; Sébastien Lilli with 7 videos extracted from his saga “From Chaos to Harmony”; and finally Brigitte Moreau Serre with her 7 sensory experiments.

Val’s sculpture is the 1:5 scale version of her masterpiece “From Chaos to Wisdom” that Val sculpted before embarking on the challenge of enlarging this monumental sculpture up to a length of 36 meters – being installed on a hill overlooking the city of Taichung in Taiwan and becoming one of the largest contemporary bronze sculptures in the world.

Val describes the inner and philosophical journey that an individual must take to move from the chaos of his subconscious to the wisdom of the state of consciousness through seven scenes: The Chaos: where an indivi- dual is submerged by mental and physical structures. It is a world in which the individual feels obsolete and tries to understand in order to face it; Crossing the ordeal: the structures organize themselves and the individual manages to relate to their environment; Hide and Seek: what we are looking for. The individual goes on and plays hide and seek with life to avoid confronting his thoughts; A Forest: a dense forest in the middle of which the image of oneself appears; Introspection: with the help of an Angkorian temple structure, the individual walks, evaluates the scale of everything around them, what they are, and walks towards peace and purity; The Gates of Freedom: suddenly the environment is organized and the right path is revealed; Wisdom: There, higher up, peace is at the end of acquired purity.

After over 5 years spent writing and filming, Sébastien Lilli offers us with the documentary “From Chaos to Har- mony” a reading of the fundamental laws of life, a journey of the soul that invites us to understand our world, our Universe, the Nature and Ourselves … and asking ourselves how we got to where we are.

Brigitte Moreau Serre’s 7 sensory experiments illustrate the philosophical path and development of her work as a painter-sculptress with a foray into the digital world, up to a contemplative immersion.

“The Expansion of Consciousness” by Brigitte Moreau Serre was inspired by her philosophical depth, by her ideali- sm of wanting through art, to help humanity evolve towards a benevolent consciousness of the cosmos, nature and human beings, in perfect osmosis with the objectives carried out by SUMUS.

Orchestrated by Rachel Seddoh, who questions interdisciplinarity through her creative practice, the curatorship was oriented on the transposition of the works thanks to the participation of Judith Guez, curator of digital art. The dy- namic of creative research that underlies the artistic direction is focused on the relationship with space through a free wandering of the viewer who will experience their own perception of the works, in line with recent cognitive science works on the bodily origin of our own consciousness.

The result is a variation of visual sounds and sound images in relation to the paintings, drawings and sculptures of Brigitte Moreau Serre. A series of perceptive tools is set in motion: augmented reality, immersive sound, rhythmic universe, 3D animation, a holographic system, a fractal video, variations of lights to set up a perceptible space.

The exhibition “From Chaos to Harmony” will be followed by a dense and diversified series of vital and cultural activi- ties – on agricolture, education, health, environment, nutrition, technology, crafts – that SUMUS is developing to col- laborate and exchange with residents and stakeholders operating in the Venetian archipelago. With this first project Sumus clearly shows its intention to facilitate the opening of our conscience to create a new paradigm of harmony with existence, in which Venice has the key role of forge of the new world.

Valérie Goutard (VAL) was born in France in May 1967. She spent her childhood and early adolescence in Afri- ca. She then lived in Europe and South America retur- ning to France after completing her higher education in Venezuela. Val was strongly influenced by her interna- tional experiences and identified with humanity rather than the citizenship of a specific country. For ten years, her marketing career took her to London, Madrid and eventually Paris. But it was 2002 when a sculptor friend showed her a more creative and alternative path. Val’s initial interaction with sculpture ignited something deep inside her to later become her vocation, an inner passion that, once ignited, cannot be extinguished.

Sébastien Lilli is a socially active entre- preneur and creator. Convinced that reality is greater than we think, Sébastien Lilli lives as an explorer of the invisible, in search of harmony. From the age of 20, after going through chaos, he created INREES, an un- precedented space for research and reflection on the frontiers of science, psychology and spirituality. Since 2007 the institution has fully participated in the inven- tion of a new paradigm.

Brigitte Moreau Serre is a visual artist and sculptor. Born in Nantes, she lives and works in Paris. In 1986 she joined the studio of the painter Edouard Mac Avoy, and then moved to the studio of Gérard Le Cloarec. Accor- ding to art critic André Parinaud: “Her painting is inha- bited by a mysticism of energy and hope. The artist’s love of human splendor shines through in her incarna- tions, which stand out from the incandescent back- grounds and remind the visitor of the essential values of humanity”. Brigitte Moreau Serre works on the mea- ning of life, which is fundamental in our societies, on the Human and its extraordinary capacity for evolution. For several years, the artist has been trying to convey the universal message that she defends using new technologies: “The ultimate goal of our life is to recon- nect with the essential Being that has refuge in us, to express our divine reality as we go through each mo- ment of our lives”.

For an environmentally sustainable, socially fair and economically sustainable society, SUMUS supports Gandhi’s motto: “Be the change you want to see in the world”. SUMUS means “we are” in Latin and wishes to replace individualism with the collectivism and having with being. “Become what you are” said Picasso. By becoming aware of their uniqueness and their poten- tial, each individual will freely express their talents to achieve personal fulfillment and bring them into the world. Each individual will also become aware that all human beings are connected with each other and with the world around them, the fauna, flora, the planet, the cosmos…

SUMUS will thus promote the emergence of a Human Consciousness illuminated by Knowledge for a respectful and sustainable future. The project was born from the visionary mind of Hélène Molinari who sees in Venice a paradigmatic model for rethinking all the cities and communities to come: “I see in the future a lively, joyful and radiant Venice, bearer of light and conscience for the humanity and for the world! A unifying Venice, which will become the lighthouse of the world, the testimony, the symbol of a new paradigm that we will have to build together “. La Fucina del Futuro is at the same time a “think and do tank” and an apolitical and ecumenical place, committed to the service of Living, the awakening of consciences, the emergence of a new economy with a positive, lasting and inclusive impact; a meeting point of exchange between inspired Venetian and international visionaries and local actors who intend to dedicate themselves to new projects. In perfect parallel to the passage suggested by the show – from chaos to harmony – the Forge is now itself in a state of “chaos” and will close after the exhibition to undergo a profound renovation and finally reopen in a state of “harmony” in January 2023.