Bangkok – Craig Thomas Gallery is pleased to announce Wandering Age, a solo exhibition of sculptures by Saigon-based artist Pham Dinh Tien. The opening reception for Wandering Age will be at CTG’s Tran Nhat Duat gallery on 28 July 2022 from 6-9pm.

Sculpture is a medium that has largely been overshadowed in Vietnamese contemporary art by painting. The modern form of sculpture that might be said to commence with Rodin has also been largely skipped over by the most recent generation of Vietnamese visual artists who tend to conceive of sculpture in the more contemporary terms of installation and conceptualism rather than in the classical sense. Perhaps uniquely for a young sculptor, Saigon-based Pham Dinh Tien has emerged as one of the most compelling young Vietnamese visual artists creating in the country today. Working primarily in bronze, Tien has rather quietly but no less impressively been producing strong works of sculpture for more than a decade.

Over the last two years, Tien has been conceiving and making the works of the Wandering Age collection. Bringing into physical form the fourteen sculptures of the collection is an achievement that has necessitated the often conflicting virtues of great creativity and great discipline. The investments of both artistic and financial resources to create Tien’s latest collection of works are substantial and provide clear evidence of the seriousness and ambition of his purpose. Tien has a preternatural ability to bend the most challenging and mercurial of materials with such dexterity that he is able to clearly express the images that form in his mind as he travels the streets of Saigon or even, he says, those which appear in his dreams.

There are a number of angles from which one might approach the works of Wandering Age. At a micro level, we are drawn to the great detail and smooth, appealing form that he is able to achieve in his sculptures. Most of the works feature a human figure or body part – legs and feet predominate – that are rendered with fluid fidelity to actual human anatomy in a way that evokes the legacy and influence of the seminal Rodin. Tien says, “My father’s job was to make Christian statues for local churches. Thanks to that, I had a chance to see many books on anatomy and classic Western statuary. Maybe because of those influences, I was capable of ‘feeling’ anatomy very well when studying at the fine arts university.”

Of his propensity for portraying both bare and sandaled feet in his work Tien says, “I think feet are less appreciated at the arts schools though I really like the geometry and shape of feet in terms of emotions. It is sometimes trickier to sculpt a foot with feeling than to sculpt a portrait. In societal terms, the feet also represent the difference in class, career and personality. People move and work on their feet. The poor often wear ‘beehive sandals’ (dep to ong) which are neither pretty nor deluxe but are very comfortable. They bring out a lot of memory and feelings for me.”

Tien’s works are much less literal and conventional than what is commonly produced by sculptors working with his favored materials of bronze and other metals. Tien professes to value “freedom” and “randomness” in his work above other virtues and this predilection is apparent in the great variety of the individual works of the Wandering Age collection. The freedom that Tien has found in a years’ long concentration on the creation of his first collection for a solo gallery show has unleashed his creativity and allowed him to indulge a natural playfulness that is the essence of his work. Works like Hard Up, Hard Down showcase both his unique sense of humor but also use imagery – the aforementioned beehive sandal and the ubiquitous plastic chair – that places his work thematically in a clearly Vietnamese context. Pieces like The Circle demonstrate his capacity for also expressing subtlety and poetry in his work.

Like other visual mediums, contemporary sculpture became less strictly representational beginning in the 1950’s with the rise of more abstract and conceptual expression. In this sense, Tien’s fidelity to bronze is evocative of a somewhat bygone era where a mastery of the technical side of sculpture was equally important to the creative side. The works of his Wandering Age lie in the liminal space between classical and contemporary sculpture. They represent a delightful yet powerful expression from a young artist who seems to be at the precipice of a glittering career in the arts. 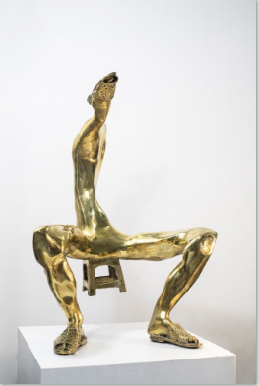 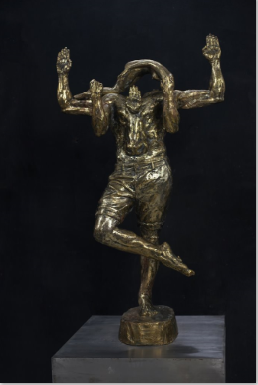 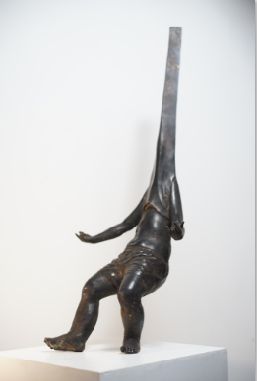