Weaving The Ocean is a project initiated by artist Ari Bayuaji, who is based between Canada and Indonesia. When borders closed at the start of the global pandemic, Ari found himself on the island of Bali for an extended period of time. Observing both the devastation of the local tourism industry as well as the environmental pollution despoiling Bali’s beaches, Ari embarked on a series of work transforming plastic waste into textile art, made in collaboration with Balinese artisans.

Weaving The Ocean addresses pressing environmental and social issues – the pollution of oceans, and the destruction of marine life and the island’s natural beauty – but through a conciliatory approach that endeavours to transform the ‘negative’ into a ‘positive’. In this way, it draws on the ethos of Balinese philosophy which seeks to balance the energies of the universe. This ongoing project is a coming-together of community effort and resourcefulness, as well as a homage to Indonesia’s rich textile traditions and the central role that the sea plays in Balinese culture.

The issue of plastic waste first came to Ari’s attention in 2015, when he photographed a mangrove tree covered with plastic. During his sojourns in Bali, he observed coils of colourful plastic rope wrapped around vegetation on the beach, or washed up onto the shore, often entangled with other found objects or marine life such as corals. These plastic ropes are used to protect fishing nets, and often wash up on coastlines in large quantities.

Ari engaged the collective efforts of artisans and others in the local community who had been made out of work to collect the plastic ropes from the beach, and to transform this unsightly detritus into works of art. Meticulously unraveled, the colourful ropes yield sturdy raw material to be transformed into evocative tapestries that celebrate traditional craftsmanship while evoking the shifting states at sea.

Much of Ari’s work is inspired by the culture of the locales he visits, and in the same way, Weaving The Ocean pays homage to the central role of the sea in Balinese spiritual life. Balinese religion is inextricably bound up with water, and the syncretic blend of Hinduism and animism widely observed on the island is often referred to as Agama Tirtha, or the religion of water. The sea plays a significant role in purification and blessing rituals, and the robes included in the exhibition at Warin Lab Contemporary are a direct reference to the ceremonial garb and costumes worn during ceremonies that the artist observed taking place on the beach, amidst and in spite of all the marine debris.

The balance between ‘light’ and ‘shadow’ is very important for the Balinese, who seek to reconcile ‘good’ and ‘evil’ through such rituals and offerings; in the same spirit, Weaving The Ocean transforms the devastation and filth of marine debris into something beneficial for the community at large order to achieve a harmonious equilibrium.

The project gives purpose and dignity to Bali’s artisans while honouring their time-honed skills, and the resulting artworks evoke the deeply calming vistas of the sea and its many shifting moods, attesting to its importance in Balinese spirituality and culture, as well as reminding viewers of what is at stake.

Weaving The Ocean is an ongoing project that addresses the issue of marine debris while embracing community resourcefulness through Balinese ethos. The project has been exhibited in Germany, Indonesia and Taiwan, with upcoming presentations in Singapore, Canada and Australia later this year. 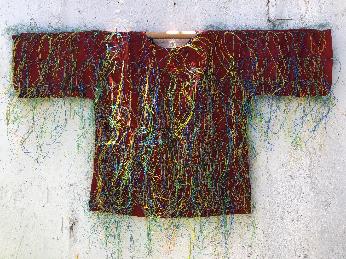 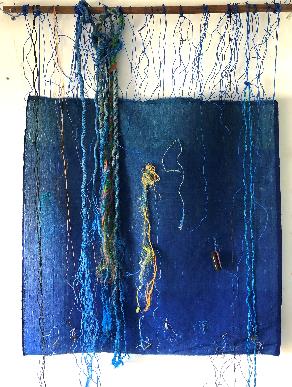 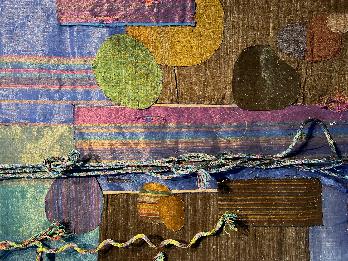 About the artist: Ari Bayuaji

Ari Bayuaji was born in Indonesia in 1975. Moving permanently to Canada in 2005, he studied Fine art at Concordia University (2005-2010). Dividing his time between Montreal and Bali, the artist is known mainly for his art installations, which incorporate the use of found and ready-made objects that he finds in different parts of the world, thereby exposing himself also to the different mechanisms of the cultures.

Ari Bayuaji is an expert in conveying aspects of daily life, as his works usually try to show the overlooked artistic value in everyday life through objects and places and their roles within society.  He has been consistent in using found/old objects from all over the world as the material and subject matter in almost all of his artworks. These objects as his creative material might be old, but the “content” as a work of art is completely new as he injects his work with emotion that is also influenced by contemporary issues he seeks to address.

His work has been exhibited in some major international solo exhibitions including The Esplanade Theatre on The Bay Singapore (2014 and 2019), Nunu Fine Art Taipei, Taiwan (2018, 2021), Parkhaus in Malkasten Düsseldorf (2018) A collaboration with Agnes B. FondationParis at Ste-Alvere, France (2017), Redbase Foundation Jogjakarta in Indonesia (2016), and Kunsthal Rotterdam in The Netherlands (2016).

About the Curator: Siuli Tan

An independent curator and former Museum professional, Tan Siuli has over a decade of curatorial experience with a focus on contemporary art from Southeast Asia. Her exhibition projects include two editions of the Singapore Biennale (2013 and 2016), inter-institutional traveling exhibitions, as well as mentoring and commissioning platforms such as the President’s Young Talents exhibition series. She has also lectured on Museum-based learning and Southeast Asian art history at institutes of higher learning such as the National Institute of Education as well as LaSalle College of the Arts.

Her recent speaking engagements include presentations on Southeast Asian contemporary art at Frieze Academy London and Bloomberg’s Brilliant Ideas series. Tan holds an MA in Art History from University College London, a BA in Literature and Art History from the University of Nottingham, UK, and a Postgraduate Diploma in Asian Art from the School of Oriental and African Studies (University of London), UK.