Showcasing Local and Locally-based Artists, with a Central Proposition 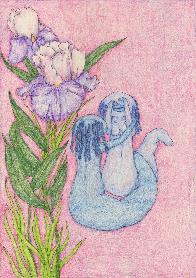 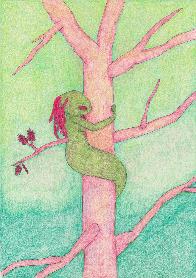 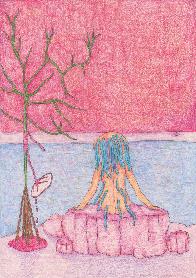 Image caption: Geraldine Lim, I Meet Her At a Place We Always Go To (a drawing journal),

with a Central Proposition: IF OUR WORLD WERE TO COME TO A SCREECHING HALT TOMORROW, WHAT WOULD WE BE LEFT WITH?

Bangkok, 10 August 2021—only losers left alive (love songs for the end of the world) is an exhibition featuring a roster of local and locally-based artists. Occurring in two parts, the exhibition takes its visual and conceptual cues from cinema, featuring tableaux populated by objects, images and sounds that evoke the moods of a universe ravaged by unknown forces. This is a show that derives its tone and tenor from science fiction, a conjuring of the future that derives sensorial pleasure from the act of retroprojection. Providing the real-world context for the mood of despondency is, of course, the current pandemic, and the climate of fear, uncertainty and paranoia in which the global population has been mired in. Where the first instalment focused on human bodies, technological objects and an almost monochromatic palette, the second half of only losers left alive (love songs for the end of the world) foregrounds instead bright and pastel colours, and visual motifs centred on flora, fauna and alien shapes – almost as if human presence has now departed the equation, and only a post-human world remains. 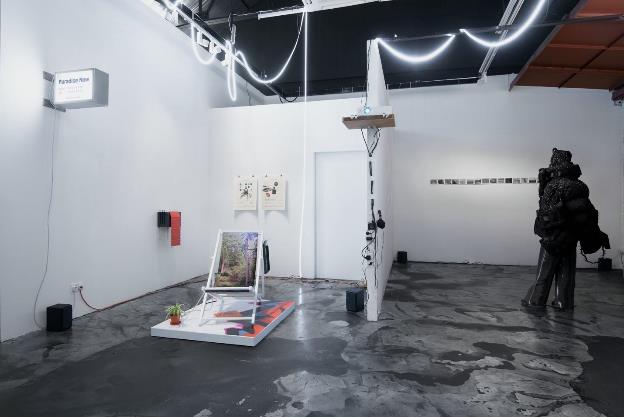 only losers left alive (love songs for the end of the world) part one. Installation view.

As in the first half of the exhibition, Singaporean filmmakers and sound artists, Mark Chua and Lam Li Shuen, have produced several songs that provide a melancholic, sentimental soundtrack for the exhibition. Along with the three tracks from part one of the exhibition, the songs will be put together as a concept album, “Never Seen The Roof”, and available as a limited edition package in the form of a cassette tape. 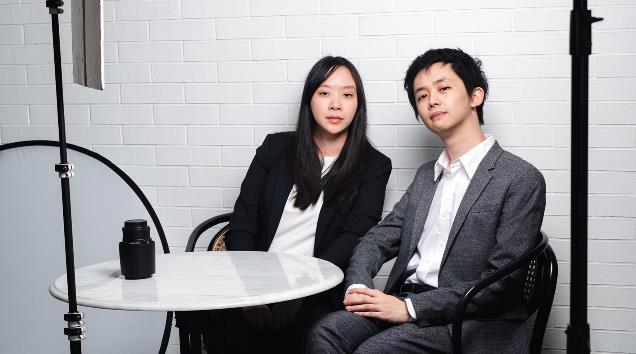 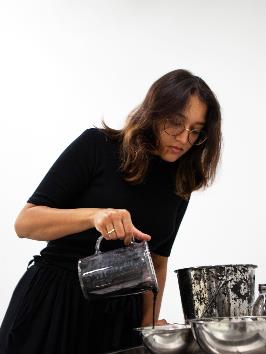 Singapore-based Victoria Hertel’s work, Short Circuit (2021), a site-specific, floor- and ceiling-based immersive installation, remains in the show. The work intervenes in the physical space of Yeo Workshop, drawing attention to the two liminal architectural poles of ground and roof. 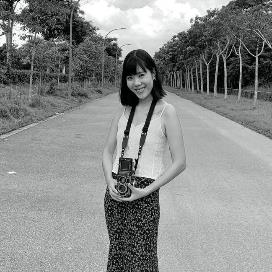 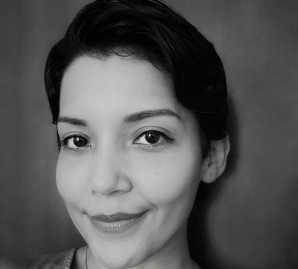 Sarah Isabelle Tan and Juria Toramae are also included. Tan worked with camera-less photographic techniques, such as the photogram, to produce light-based captures of local flora, which she works into both still and moving images. Toramae’s hypnotic, mesmerising video piece presents fictional, metamorphic morphologies based on the artist’s personal documentation of various marine species found in Southeast Asian waters, churned out by what is known as generative adversarial networks (GANs), where unsupervised machine learning is trained to process patterns in input data so as to generate or output new examples based on the original dataset.

Geraldine Lim’s series of 79 drawings in colour pencil and pen treat the practice of drawing as journalling, dealing with the artist’s feelings of isolation and anxiety, and serving as an expression of her compulsion to fantasise an alternative world where the self is placed in various imagined scenarios, from strange intimacies to suffering. The figures in her work are amorphous, with shifting colours, limbs, protrusions, organs and wounds, a reflection on what it means to own a body, and the identifications of gender and sexuality.

Masuri Mazlan’s installation of sculptures and lights are inspired by his personal fear of contamination and infection through sexual intimacies, and uses latex as a metaphor for protection, as well as its approximation of the textural quality of skin. The material’s tensile strength and stretchable surface allow for a play on our conventional notions of painting and sculpture. 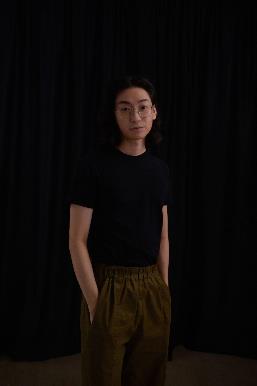 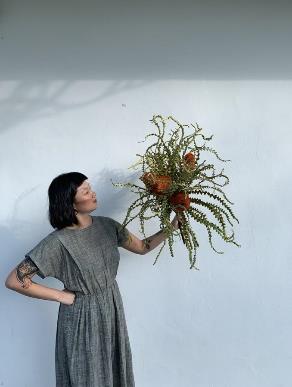 Samuel Xun’s soft sculptures likewise represent experiments in colour, materiality and form; his personal sensibilities evince qualities of campiness and kitsch, and their alien-ness. Finally, Georgette Goh’s installation is a botanical one, incorporating fresh specimens, and foraged and artificial floral and botanical elements.

Geraldine Lim is an artist who is interested in the psychological context of social alienation and the threats of the non-conforming and the notion of the strange. Working primarily with drawing and soft sculpture, she explores encounters of anxiety and the different facets that constitute what she perceives as her identity through creating fragmented narratives and selves in an alternative world filled with amorphous beings, creatures and things.

Georgette Goh is a Singaporean craftsman and the co-owner of ART.WOOD.SPACE. She is interested in all things whimsical, extotic and generous of spirit. Her work combines themes such as dream fortress, woke culture and wounded nature on one hand and fantasy in a heavy emphasis of nature on the other.

Juria Toramae is a Singapore-based, Moroccan-Thai artist whose work engages themes of cultural dislocation and the natural environment. Her practice is fieldwork-oriented, driven by a longstanding interest in diasporic imaginary, intertidal ecologies, and oceanic imaginations. She works in the intersection of video, photography, cartography, painting and multimedia installation. Toramae’s work has been presented at international festivals and venues including the Singapore Art Museum, the Singapore International Photography Festival, The Photobook Exhibition for Athens Photo Festival (Greece), the Obscura Festival of Photography (Malaysia), the Chiang Mai University Art Center (Thailand), and The Substation (Singapore).

Masuri Mazlan is a Singapore-based cultural worker, object maker and co-founder of Tekad Kolektif. He graduated with a BA in Fine Art (First Class Honours) accredited by Goldsmiths, University of London. He was awarded the prestigious Goh Chok Tong Youth Promise Scholarship Award (2016) that merits his artistic talent and many contributions to society. He was also a recipient of the coveted International TAKIFUJI Art Award by the Japan Traffic Culture Association (2017). He then received The Winston Oh Travelogue Research Award (2018) and he was accorded the Anugerah Cemerlang by MENDAKI (2019) for emerging in the top percentile of his cohort. He was the recipient of the NAC LASALLE Community Arts Mentorship Programme (CAMP) (2019) to co-lead art workshops on grassroots level. He also co-organised the recent exhibition, Resituating Home(work): Hyper-Material Domesticity and Of Spaces and Phases in conjunction with Singapore Art Week 2020-21.

Samuel Xun is a Singaporean multidisciplinary artist and fashion designer that challenges the idea of gender by cross-referencing the hegemonic framework of Singaporean queer identity with Euro-American lineages of camp and the queer aesthetic. His work includes soft-sculpture installation and graphic art as well as fashion design informed by film, culture and personal narratives, through which, he questions the boundaries of how queerness invades the national rhetoric through physical representations like the clothed body and material culture, as well as through digital manifestations like social media. He graduated from LASALLE College of the Arts with a Bachelor in Fashion Design & Textiles. In his final year, he was awarded the Swarovski Innovation Prize (2020) and was nominated for the McNally Award (2020).

Sarah Isabelle Tan is a Singaporean artist whose work delves into the ontology of the photographic, navigating between nuances of the tangible and intangible. Working across visual imagery and printmaking, she is particularly interested in the materiality of the photograph and its (re)representation of things. Navigating personal encounters of loss, memory, fleeting moments, and a longing to possess what is always beyond reach, Sarah’s practice is driven by open-ended inquisition and contemplation.

Victoria Hertel is a German-Venezuelan artist working in process painting, site-specific installation and material studies. She is interested in material-oriented phenomena and trace as energy in materialities. Hertel‘s research and practice focus on immersive sensory experiences that address the inherent knowledge of the body. In 2016 Hertel received her BFA from the University of Barcelona, during which she also studied at the Academy of Fine Arts Munich on an Erasmus+ scholarship. In 2021 she graduated from LASALLE College of the Arts Singapore with an MA in Fine Arts. Hertel lives and works in Singapore.

Louis Ho is an independent curator, critic and art historian who works in the field of

Art Prize finalists’ exhibition, an award for digital art from across Southeast Asia, and “The Foot

Beneath the Flower”, a show that examined the aesthetic vernaculars of camp and kitsch in

the contemporary art of the region. He was formerly a curator at the Singapore Art Museum, where his first exhibition for the museum was the permanent collection exhibition, “After Utopia”. He was also a co-curator of the fifth edition of the Singapore Biennale, titled “An Atlas of Mirrors”. He has published extensively, contributing critical reviews to art publications such as ArtAsiaPacific, as well as scholarly essays to academic journals such as Modern Chinese Literature and Culture (MCLC). As a teacher, he taught courses on contemporary Southeast Asian art at Singapore’s National Institute of Education (NIE).

Yeo Workshop is a leading art gallery with a focus on education. Locally founded, it is based in Gillman Barracks Singapore since 2013. It is at the forefront of cutting-edge contemporary art and committed to curating avant-garde, unique and insightful exhibitions and public art projects, online engagements such as video festivals, as well as producing gallery-based programmes such as talks, symposiums and guiding research.